Hello Friends of Climate! If we have important announcements or updates they will be posted here.
THE NEXT STYROFOAM COLLECTION DAY WILL BE JULY 11TH
July 29, 2008 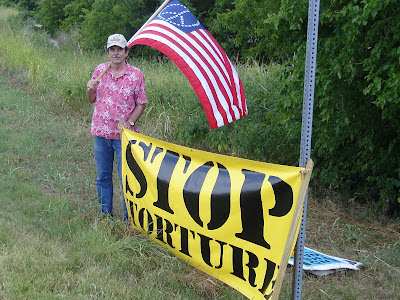 "Bush may be a lame duck, but we're not," was Harrison Ward's quick response to the question of why we continue to protest. His response sums it up very accurately. Of course, the national media is paying less and less attention to the man, as he becomes more irrelevant.
But we feel it important to continue the tradition of protests at the ranch checkpoint each time Bush is there (since 2005). Its a matter of conscience and consistency--to never let Bush forget that there are millions of Americans who strongly object to his illegal wars and shredding of the Constitution. And that approximately 210 million disapprove of his presidency. There were only 2 of us available for this latest checkpoint action. (Thanks to Kay Lucas for loyal and able shuttle service). But we are a ripple that reaches to the ranch and to many others in Central Texas. And an added bonus--Channel 6 TV did a very nice interview at the scene. As Howard Zinn says: every action, no matter how small, is important to the cumulative movement.