Friends of Peace message for the election year. 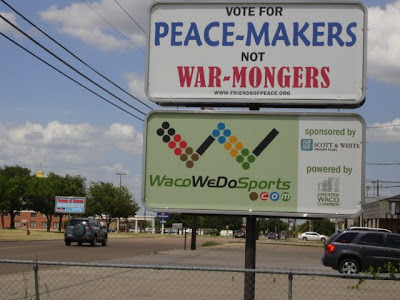 As of May 1st, 2008, the Friends of Peace billboard is back! As you know our previous impeachment billboard heroically survived verbal attacks, the severe limitations to the 1st amendment in Waco, and physical assault--for 5 months. But finally its brave message was censored about one year ago. So we are very happy to have a new message for the election 2008. We will maintain this board through the November election. Although Friends of Peace does not typically endorse a candidate for President, I think it's clear which candidate is closest to voicing an anti-war sentiment. The current location is on Panther Way near Hewitt drive in Hewitt. While driving on Panther toward the light at Hewitt Drive, the visibility of this sign is fantastic. But our plan is to move the sign around in other parts of Waco, especially those sites with very high traffic. We feel the simple and powerful message is an important reminder at this time--less the lesson of Iraq and other imperialist wars be forgotten. (Thanks to our friend Carl for the phrase). Contributions to help keep this billboard going are greatly appreciated.