Hello Friends of Climate! If we have important announcements or updates they will be posted here.
THE NEXT STYROFOAM COLLECTION DAY WILL BE JULY 11TH
April 16, 2008 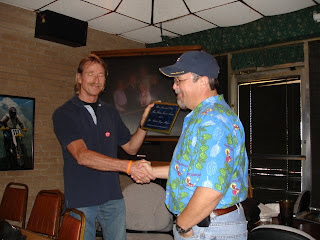 The Reverend Robert Kenji Flowers
Best Friend Forever Awardee 2008
Waco Friends of Peace.
Thursday, April 10, 2008.
Robert accepts the plaque from FOP member Alan Northcutt at the monthly film/lecture meeting series. The crowd was standing room only as members and guests honored the 6 year Friends of Peace veteran. Robert will be leaving the Wesley Foundation in June for an assignment at a church in Fort Worth. Several attendees spoke in praise and respect for Robert, who has been a mainstay of the organization for years.
Robert was always available for protests and other actions--willing to speak out against war, torture, and man's inhumanity to man. I personally was inspired as well by his depth of knowledge on religious matters and history in general. Robert is a graduate of the SMU Perkins School of Theology and serves on the Alumni Council 2007-2008. He completed his Doctor of Philosophy degree recently at the Austin Presbyterian School of Theology.
The Friends of Peace and the Central Texas area will greatly miss Robert's knowledge, kindness, cooking, loyalty, hard work, and courage in the struggle for peace. Fort Worth will be blessed by his presence.
Please add your comments about Robert below.