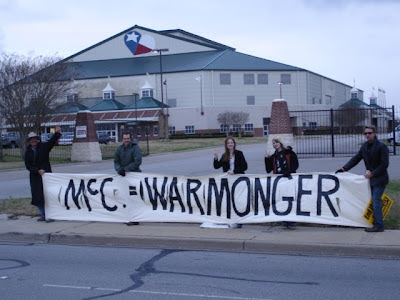 Presidential candidate John McCain held a "town hall meeting" at the HOT fair complex the evening of March 3, one day before he secured the GOP nomination for 2008. We felt strongly compelled to protest his presence: no one embodies the philosophy of constant war and imperialism more than McCain. Recently he stated that he had no problem with the U.S. occupying Iraq for 100 years. He finds bombing the people of Iran a joking matter with his vocal rendition of "bomb bomb bomb, bomb bomb Iran....." The evening was bitterly cold with a wind chill reading of about 25F. But traffic was slow and heavy and every car entering the event could definitely read our signs and banner. The messages were "McC. = WARMONGER", "vote for peacemakers not warmakers," and "7 years of Bush, haven't had enough?". Thanks to the activists above for anchoring the banner in the fierce wind: Carl, Harrison, and two high school students. It was inspiring to have the two students (Obama supporters) spontaneously join us to express their desire for a change from the policies of war and aggression. To further emphasize the message, Carl made a brief pass through the meeting carrying a sign of opposition. Although McCain may have received a warm greeting from those inside the event, all those in attendance and no doubt McCain himself realized that there are voices of conscience in Waco who reject his imperialist world view.