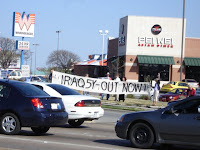 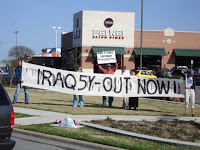 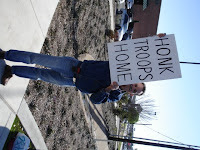 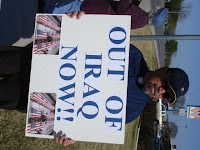 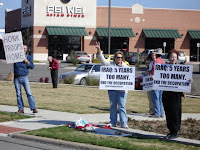 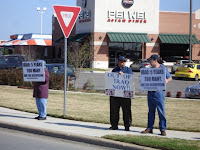 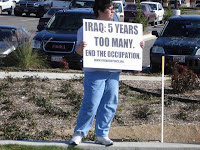 The Waco Friends of Peace staged a protest on the 5th anniversary of the Iraq occupation at the corner of Valley Mills Drive and Waco Drive from 4p.m. until 6p.m. About a dozen activists held a 15 foot banner and individual signs. The traffic was heavy during this rush hour time, and the response by motorists was about 90% positive. We were pleased with the number of protesters present during work hours, and excited by 3 or 4 new individuals who came to express the truth. A young man with imminent shipment to Iraq received counseling about his options.
It was a beautiful day, and everyone there knew it was the right place to be, to express your conscience, at that moment in time.
We also experienced a first on this day. ALL local TV outlets and the Herald-Tribune newspaper covered the story. So all local news reports on the 5th anniversary had voices of continued opposition to this illegal war. We reminded the people of Waco that the war has cost 1 million Iraqi lives, displaced 4.5 million Iraqis, destroyed Iraq's infrastructure and antiquities, killed 4000 Americans, injured tens of thousands, exploded the national debt, and will ultimately cost 3 trillion dollars.
Thanks to all the activists who gave of their time to make an important statement.