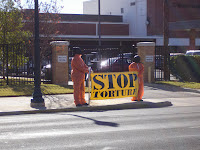 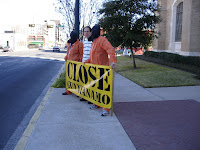 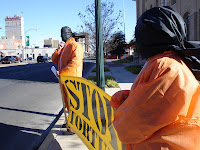 The Waco Friends of Peace sponsored a protest January 10th, one day before the 6th anniversary of the opening of Guantanamo Bay prison. The event occurred in front of the Federal Courthouse on Franklin and 8th in Waco. Five FOP activists were dressed in Gitmo garb and held signs "Close Guantanamo" and "Stop Torture." As usual the police attempted to intimidate us and move us across the street. We insisted on our 1st amendment rights on a public sidewalk and stayed there for about 3 hours. We believe Gitmo is a national disgrace because detainees have been held for years without charge or trial (and often without lawyer), children as young as 13 have been held, 55% of detainees have not committed any hostile act against the U.S., habeas corpus has been destroyed, and because illegal torture as occurred. We call for the closure of Gitmo as have the U.N., international human rights groups, and even Colin Powell.
We were honored to have local attorney and elected official, David Schleicher, join us (pictured without hood). We admire and thank David for his courage and conscience, and especially for his willingness to join us and speak out in Waco--at a place where he is very well known.
The Waco-Tribune Herald published a very fair article with photo and we also thank the paper for its interest.
This action was a great success--keeping the abuses of Guantanamo in the public conscience, and demonstrating that speaking out for truth is an acceptable and virtuous action. 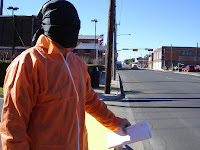