Hello Friends of Climate! If we have important announcements or updates they will be posted here.
THE NEXT STYROFOAM COLLECTION DAY WILL BE JULY 11TH
January 06, 2008 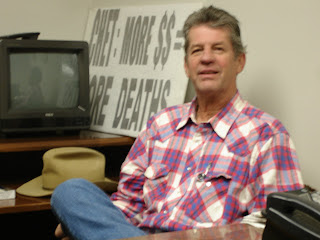 Four members of Friends of Peace and Vets for Peace assembled at Representative Chet Edwards' Waco office December 17, a few days before the House vote on more funds for the Iraq occupation. We had met with Mr. Edwards on 2 occasions before, and felt he was interested in the issues and sincere. He had expressed dissatisfaction with the Iraq War and seemed eager to end it. But on the 17th we stayed the entire day until closing of the office--and he refused to speak with us. We were very disappointed at his lack of response on this most important issue of our time. And later in the week the Congress again became invertebrates and approved $70 billion more in war funding--with NO timeline for withdrawal of troops. To our shock and disappointment--Congressman Chet Edwards was one of the Democrats who did vote FOR such funding. I faxed a letter to Mr. Edward's office expressing my disgust with his vote (see below). My feeling at this point is that the Democrats will not take steps to end the war in Iraq during Bush's term. Many thanks for the extreme dedication of Carl Rising-Moore, and Harrison Ward and Mrs. Haney (images). And as always, thanks to Ms. Johnson in Mr. Edward's office for her hospitality. 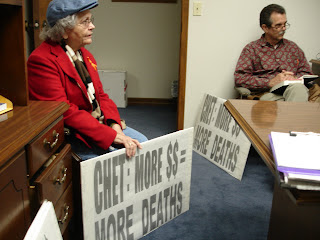 Dear Congressman Edwards,
I and others of the peace community in District 17 have met with you twice concerning ending the Iraq occupation. At the time we felt you were sincere in addressing our concerns. But I and many others were shocked and disgusted by your vote last week to provide $70 billion more funds for the war with no timeline for troop withdrawal. You have betrayed the American people, 60% of whom have demanded such a timeline. By giving in to the bullying of Bush, you and the other Democrats who voted for the funding now also OWN the war—its not just Bush’s fiasco anymore.
Yes of course Bush would threaten a veto—but it was up to the Congress to stand up to his threats and carry out the will of the American people. The people are smart and mature enough to no longer buy this “support the troops” nonsense for unrestricted funding. If you really wanted to “support the troops”, you could take steps to bring them home alive—not provide money for their continued slaughter.
I can not imagine why you would support the Bush monarchy instead of the troops and the American people. Bush has lied us into an illegal occupation of Iraq (for oil and empire) , authorized torture and rendition, spied on Americans illegally, destroyed habeas corpus and stomped on the Constitution. Its past time for the Democrats to restore the good name of the United States.