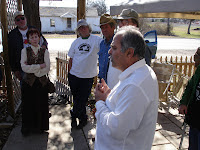 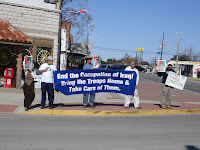 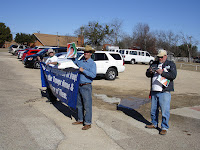 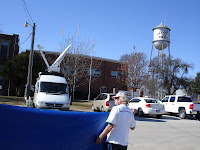 The Holidays always bring Bush to Crawford, and activists are always there to object to his imperial Presidency, endless wars, priorities of business over people, and decimation of the Constitution. The general public is also mostly disgusted by him but seems willing to let his term expire without impeachment. The Democrats have done little to stand up to his distorted priorities. But many of us feel its still up to the grassroots to express that voice of conscience near the source of evil Power.
These are images of some of the actions near the ranch during the Holidays. On Dec. 30, activists from the Crawford Texas Peace House, Camp Casey Peace Institute, Waco Friends of Peace, and others met and discussed the day's plans. Signs expressing opposition to the Iraq occupation were displayed in downtown Crawford and in front of the press corp site (with water tower in background). A march occurred from the Peace House to the press core site. At the ranch checkpoint, women dressed in black and others honored the death of the inspirational Mrs. Bhutto. Other sentiments were "Worst president ever," and "End the War." 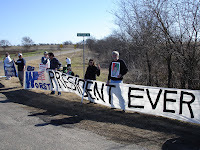 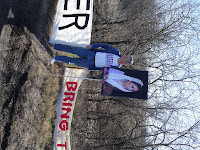 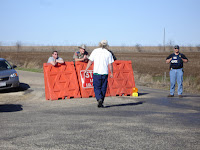 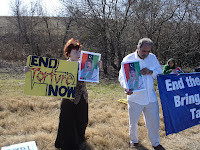 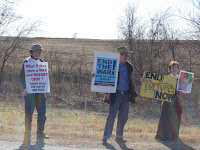 On New Year's Eve the hard core activists braved the cold to be at the checkpoint at midnight. It felt right to express truth to power as 2008 arrived. One sign showed the war criminal's face with the words "impeach" and "2008."
Thanks to everyone from the organizations involved and to all peace workers for their cooperation together and dedication. 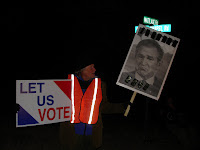 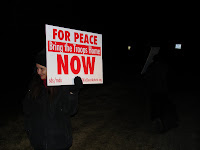 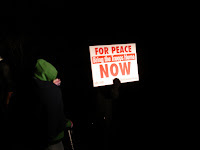 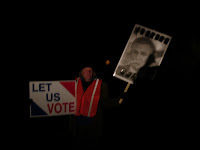