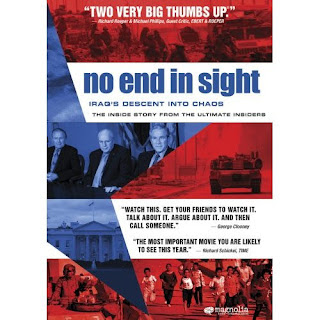 enter from outside or inner door. 703 N.

AUDIENCE: Everyone welcome.
SYNOPSIS:
The first film of its kind to chronicle the reasons behind Iraq’s descent into guerilla war, warlord rule, criminality and anarchy, NO END IN SIGHT is a jaw-dropping, insider’s tale of wholesale incompetence, recklessness and venality. Based on over 200 hours of footage, the film provides a candid retelling of the events following the fall of Baghdad in 2003 by high ranking officials such as former Deputy Secretary of State Richard Armitage, Ambassador Barbara Bodine (in charge of Baghdad during the Spring of 2003), Lawrence Wilkerson, former Chief of Staff to Colin Powell, and General Jay Garner (in charge of the occupation of Iraq through May 2003) as well as Iraqi civilians, American soldiers, and prominent analysts. NO END IN SIGHT examines the manner in which the principal errors of U.S. policy – the use of insufficient troop levels, allowing the looting of Baghdad, the purging of professionals from the Iraqi government, and the disbanding of the Iraqi military – largely created the insurgency and chaos that engulf Iraq today. How did a group of men with little or no military experience, knowledge of the Arab world or personal experience in Iraq come to make such flagrantly debilitating decisions? NO END IN SIGHT dissects the people, issues and facts behind the Bush Administration’s decisions and their consequences on the ground to provide a powerful look into how arrogance and ignorance turned a military victory into a seemingly endless and deepening nightmare of a war.
Actors: Campbell Scott, Richard Armitage, James Fallows, Samantha Power, Barbara Bodine
Format: Closed-captioned, Color, Dolby, DVD-Video, Subtitled, Widescreen, NTSC
Language: English
Region: All Regions
Aspect Ratio: 1.77:1
Number of discs: 1
Rating: unrated
Studio: Magnolia
Run Time: 102 minutes

The best documented and detailed documentary on Iraq I have seen. I'm sure you will be informed and feel your time is well spent. Please attend and support this unique forum for information and opinion in Central Texas.