Hello Friends of Climate! If we have important announcements or updates they will be posted here.
THE NEXT STYROFOAM COLLECTION DAY WILL BE JULY 11TH
September 03, 2007 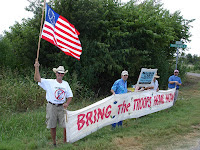 WE WILL NOT BE SILENT.
Protests continued this August when Bush was at the Crawford ranch for vacation. Carl led the way with a continuous presence at the Peace Institute and several nights sleeping in the ditch near the checkpoint. Kudos to Carl's perseverance and leadership. Kay at the Peace House as always provided wisdom, logistical support, sustenance, and shuttle service. Small groups joined Carl in the evening and other times at the checkpoint. An action led by Carl at the Billionaires for Bush fundraiser entrance garnered national news coverage and the arrest of Carl. The images here are of a protest across the street from the checkpoint on August 25. Friends of Peace members
including Boyce, Robert, and Harrison were joined by Carl, Kay,
and friends from Valley Mills and Dallas for 4 hours in the sun.
We number 6-8 at various times, but now we speak for 210
million Americans calling for an end to the occupation of Iraq.
Clearly the administration knew we were there as we were buzzed by helicopters twice. And 4 media outlets covered and reported on this action! Thanks to everyone for their hard work and effort during August. The American people have already spoken. But as long as the Congress and Bush refuse to end this illegal war, we will continue to speak out directly as voices of conscience. 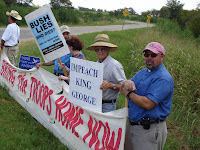 "All tyranny needs to gain a foothold is for people of good conscience to remain silent."--Thomas Jefferson. 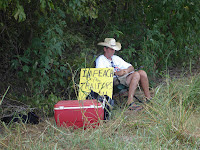 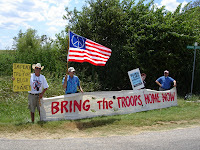