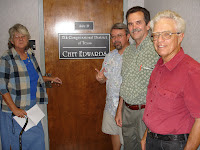 Waco Friends of Peace held a videoteleconference with U.S. District 17 Representative July 19. Congressman Edwards was very cordial and interested in our viewpoints, and he seemed sincere. I read a signed statement to him as we faxed a copy to his Washington office. He then responded and those present also stated their personal opinions and concerns. This is our second meeting with Mr. Edwards and I feel his position has moved in a positive direction since the first encounter. He DID vote a couple weeks ago FOR the House resolution for withdrawal of most U.S. troops from Iraq by April, 2008. I felt he is with us on ending the occupation. Although he may agree somewhat on the legitimate grounds for impeachment, he stated he does not feel it is a good step at this time. He was called away for a House vote and thus our meeting was cut short. I believe the teleconference was productive and worthwhile. He knows that many in District 17 support his recent vote to end the Iraq war. Our thanks to Representative Edwards for his time and concern, and to Mrs. Johnson in his Waco office for helping arrange the meeting. And many thanks to Kay, Robert, Harrison and Boyce (pictured above) for their expertise and for participating in this effort. Additional votes on this issue will come up in September and hopefully before that time. Remember the number to call Congressman's Edwards DC office is 202 224 3121. It is crucial that voices supporting an end to the occupation be heard by our Representative, especially given the nature of District 17. See text of the statement we gave to Mr. Edwards below.

Dear Congressman Edwards,
Waco Friends of Peace members are honored to speak with you by video teleconference today. We applaud and thank you for your vote last week for the House resolution calling for withdrawal of most U.S. combat troops from Iraq by April 2008.
But this vote is just one step in the process to end the occupation of Iraq and restore the good name of our country in the world community.
When Mr. Bush vetoes legislation with a timeline for removal of U.S. troops, we call on you to stand strong against Bush this time and continue to pass legislation with a troop withdrawal deadline of April 2008.
We call on you to support complete withdrawal of American occupiers from Iraq, including contractors, mercenaries and war profiteers. No permanent U.S. military bases should remain.
We call on you to oppose the Iraqi Oil Law passage as a U.S. “benchmark” for Iraq. The bill is opposed by the Iraqi Federation of Oil Unions (IFOU), and would surrender sovereignty of Iraqi oil to multinational corporations.
We call on you to help restore America’s reputation in the world as a leader in human rights by supporting legislation to end all torture, halt funding for the School of the Americas, close Guantanamo Bay prison, end all extraordinary rendition (outsourcing of torture), and restore habeas corpus and the guarantees of the Geneva Conventions to all detainees/prisoners.
We call on you to support house investigation of articles of impeachment against Bush and Cheney for the illegal occupation of Iraq, authorization of torture, warrantless surveillance, and violation of the Constitutional separation of powers. Although only 17 months remain for the Bush administration, the principles of our democracy require removal of this lawless administration. A recent American Research Group (ARG) poll found 45% of Americans favor impeachment of Bush, and 54% favor impeachment of Cheney.
The Iraq war has cost the lives of up to 1million Iraqis and 3634 U.S. soldiers, displaced 4 millions Iraqis, damaged our reputation worldwide, and cost 500 billion dollars. And the latest NIE report has again found that the war in Iraq is making us more likely to suffer a terrorist attack in the U.S.
A timetable for withdrawal of U.S. forces from Iraq is favored by 70% of Americans and Iraqis, and a majority of Iraq Parliament members.
Therefore, we request that you stand with 210 million Americans to end the Iraq occupation rather than with 1 President who is detached from reality and has no interest in ending this tragic war before his term is over.