Hello Friends of Climate! If we have important announcements or updates they will be posted here.
THE NEXT STYROFOAM COLLECTION DAY WILL BE JULY 11TH
March 16, 2007 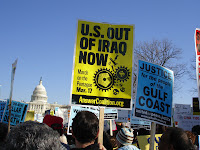 SATURDAY, MARCH 17, 2007.
The Friends of Peace will support the large rally, march, and concert in Austin. We will carry our new banner: www. FRIENDS OF PEACE. org
WACO, TEXAS.
We have many activist friends in Austin and Dallas and wish to be a part of this effort. Kay is creating a Crawford Peace House float which is a miniature version of the real Peace House.
The rally and march start at noon at the State Capitol, and the march proceeds to City Hall. A concert is scheduled from 1:30-3:30p.m. For details: www.instrumentsforpeace.org The official name of the event is Million Musicians March for Peace.

SUNDAY, MARCH 18, 2007.
The Friends of Peace will stage a local protest beginning at 2:00p.m. at the corner of Valley Mills Drive and Waco Drive, the corner nearest Jason's Deli. A local presence here is crucial since a large segment of the Waco population still supports the illegal Iraq occupation, despite the national rejection of the war. Depending on numbers, we may also consider our live freeway blog at the overpass of I35 near 7th..
IRAQ 4YRS: OUT NOW.
BRING THE TROOPS HOME NOW.
HONK FOR IMPEACHMENT.
TORTURE IS NOT A FAMILY VALUE.
All peacemongers welcome; your help is greatly appreciated. If we don't speak out, we are complicit. We have large banners; bring your own signs also. (No attachment of signs in the overpass please!).

LEGISLATIVE EFFORTS.
Hopefully our efforts with Rep. Edwards have helped persuade him. He has been active in a House Appropriations committee to approve a bill with a deadline in Sept. 2008 for removal of all troops. The bill provides loopholes for Bush however. Of course, such a bill is far from what we want--that is, to cut off funding for continuation of the war and an orderly withdrawal to start immediately. And even if the Congress passes a bill with withdrawal deadlines, it is likely to be vetoed by Bush. At least these are small steps in the right direction. The history of Vietnam reveals the Congressional action was a slow, incremental process to end the war. I personally feel we should continue to work with Congress, but demand an immediate withdrawal. I have called Rep. Edward's office, thanking him for his steps so far, but emphasizing our demands as well.
I have found a toll free number to reach the Congress: 1-888-851-1879. I suggest we keep up the pressure.