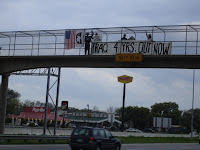 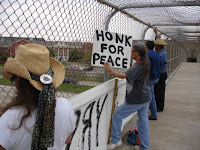 The Friends of Peace with help from Dallas and Austin activists performed a live freeway blog at the I35 overpass near 7th street starting 5pm, March 20th. With rush hour traffic, we reached an estimated 21,600 motorists! The response was overwhelmingly positive. We attracted 2 visits from the police, with the usual attempts to intimidate our expression of 1st amendment rights. We also attracted a small group of counterprotestors who were good natured, but unfortunately their signs were not legible at freeway level.
So as this series of local protests on the 4th anniversary ends, we look at congressional action.
The House has just passed a supplemental appropriations bill for the occupation which includes a deadline of troop withdrawal as late as August 2008. Of course the bill is a huge disappointment and includes many loopholes Bush would no doubt utilize. Maybe it is better than nothing. But I believe the peace movement should keep the pressure on the government to end the war, and bring home all troops by the end of 2007. The movement has made a huge difference over the last several years in helping to change the direction of the country. But much remains to be done, and civil disobedience remains "on the table."