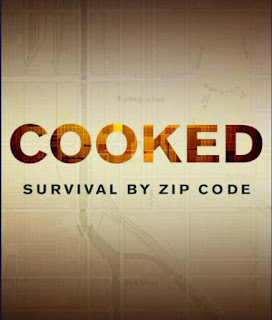 This film dissects the 1995 heatwave in Chicago that killed 700 people.  One reason the documentary is valuable is the fact that heatwaves are the number one killer among climate-related disasters in the United States.  In this Chicago heatwave most of the deaths were on the South Side, emphasizing the connection between poverty, adaptation, extreme weather events, and death rates.  In other words, this powerful film focuses on environmental justice.

COOKED was the recipient of at least 9 film festival awards, including DOC NYC 2018, EarthXFilm, and Woods Hole Festival.
No comments:

Here is a link to the Meatless Monday website:  https://www.meatlessmonday.com/.

We are pleased to announce the 2nd Peoples' Choice Award winner:

You will recall that we announced the 1st Peoples' Choice winner at the Show reception in September.  But since the Show extended through October, we did a 2nd Peoples' Choice to allow new visitors to vote and to further recognize our artists.

Shawn's piece also won 1st place in the judging of the show.  It's clear that his entry appeals to the professional artist judges, the scientist judges and the general public.

Congratulations to Shawn. And we congratulate all artists for recognizing the critical importance of the climate crisis and thus applying their talent to help combat this existential danger.

Waco Friends of Peace/Climate had a table at Ciclovia 2019 at MCC on November 9th.  "Ciclovia " translates "bikeway", and it promoted biking and other forms of exercise and wellness.  There was reasonable attendance for their first year.

Many thanks to our new member, Monty Suffern, for volunteering and for great assistance. Thanks also to Ruben Salazar for organizing the Ciclovia at MCC. 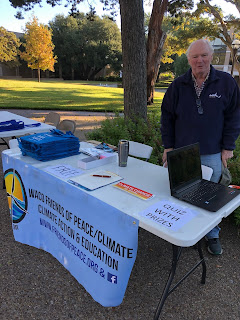 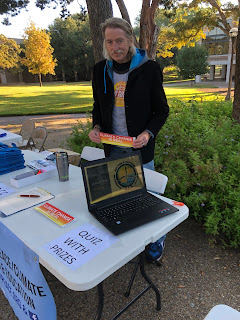