Senator Cornyn protest at the Mayborn Convention Center in Temple

On Friday, January 27th, a protest was held in front of the Mayborn Convention Center in Temple, where Senator John Cornyn delivered a speech on business issues.  About 100 activists, including three from Waco Friends of Peace/Climate, withstood the cold with a message reaching many entering to hear Cornyn’s speech.

Cornyn is the new form of climate denier:  he claims that the climate is changing, but government should do nothing.  This position is as wrong and dangerous as that held by those who totally deny the existence of anthropogenic climate change.

The organizer of the protest asked for signs to be business oriented. 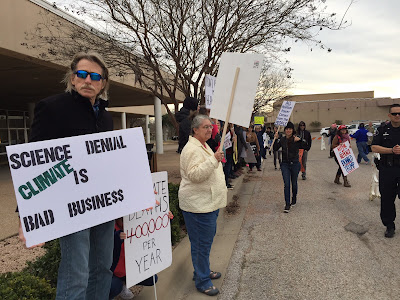 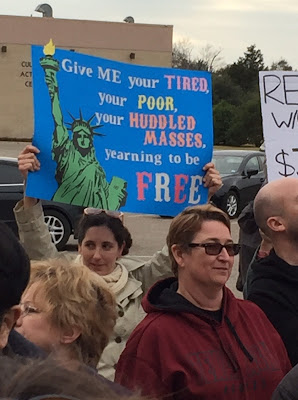 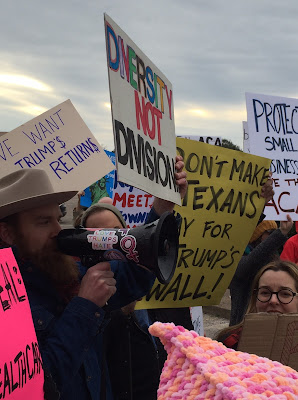 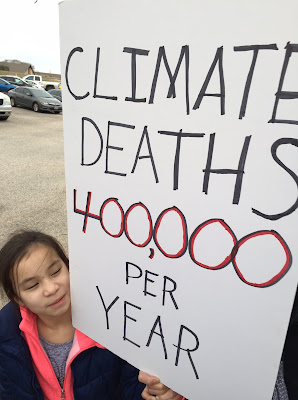 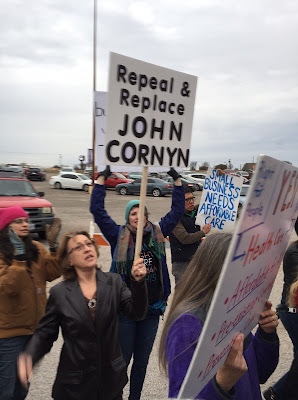 The following article was posted after the downtown Waco protest on January 20th:

Alan Northcutt said he has repeatedly heard from other people that he should give President Donald Trump a chance.

“This man nominates a white supremacist as his chief strategist. So if that’s his strategy, well he’s had his chance and he’s blown it already,” the Waco Friends of Peace/Climate director said. “This nonsense about a kinder gentler Trump, it’s nonsense. We have to start out on day one opposing his dangerous policies.”

More than 250 people gathered Friday evening in downtown Waco on the day of Trump’s inauguration as the 45th president of the United States to protest his policy proposals and administration selections.

The event — which included music and cookies — was sponsored by the Waco Friends of Peace/Climate, the Baylor Democrats, InterWaco, Stonewall Democrats of Central Texas and the North East Riverside Neighborhood Association. Handmade signs colored the crowd, some reading “Make America Kind Again,” “Keep Your Tiny Hands off my Rights,” “If I were to remain silent, I would be guilty of complicity,” and “Sorry for the inconvenience we are trying to change the world.”

Music from Venus Envy, Tea Aguilar, Stumblin’ Jaxon and others filled Heritage Square along with speeches and poetry.

The groups organized the event because of deep concerns about Trump’s “lack of qualifications, racism, xenophobia, misogyny, dishonesty, conflicts of interest and attacks on freedom of speech and on freedom of the press,” according to the event description.

Waco attorney David Schleicher told the crowd they were brought together by their love of country, the planet and fellow humans. The event continued an American tradition that dates back to 1853: protesting on Inauguration Day.

“I want to thank you for showing the extra dose it takes to protest where you live and work,” Schleicher said. “If Trump’s words and deeds seem to you abnormal, know that you are one of plenty, who will not shut up, give up, nor look away from today all the way until 2020.”

To those who question the point of protesting after someone has been elected to office, Kristen “Monae” Mouton said there’s never a time she will just accept misogyny, racism and xenophobia. She never wants to accept a world that constantly dehumanizes people or a president who allows his supporters to do the same, said Mouton, the Baylor University NAACP political action committee chair and Diverse Verses vice president.

“Voting for Trump was an act of racism,” she said. “Even if you your self don’t consider yourself racist, you let that go to the back burner. You said that wasn’t a big enough thing for you to not vote for someone, that wasn’t as important as economics or any of the other things you vote for.”

Northcutt said he considered traveling to Washington, D.C., to protest but felt it was important for Waco to have the opportunity to share its voice. He said he has lived in the city more than 30 years and has seen the growth of progressives and liberal groups in the area.

“A lot of people may be progressive but in this town they are even afraid to say so,” Northcutt said. “So this is awesome that all of you have come out and been willing to do this and state your beliefs very publicly. I think it’s a good solidarity move for everyone here.” 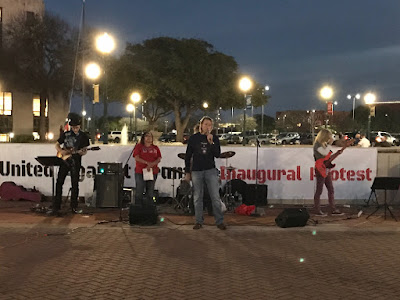 This post is from Alan Northcutt, who was the lead hand in organizing the Inaugural Protest:

Deepest  thanks to all the activists who did the preparation:  Carmen Saenz, Cindy Albert, Ana Northcutt, Bruce Huff, Sherrell Emanuel Huff, Travis Hipp, Harrison ward, Adrian Northcutt, Jessica Green and Craig Nash.  I apologize for any names that I missed.

Huge thanks to the musicians who created the amazing soundtrack: Venus E and Tea Aguilar.

My gratitude to the reporters who spread the word:  Cassie L. Smith, Kandace Thomas, the Lariat reporters  and one other TV reporter.

My graditude to & respect for the 214-250 people for their conscience and courage in attending & making the event a success.

My appreciation for the growing progressive community in Waco, and for its increasing courage to speak out publicly.

And my agreement with Congresswoman Barbara Lee, who said: "....I will not be celebrating or honoring an incoming president who rode racism, sexism, xenophobia and bigotry to the White House."