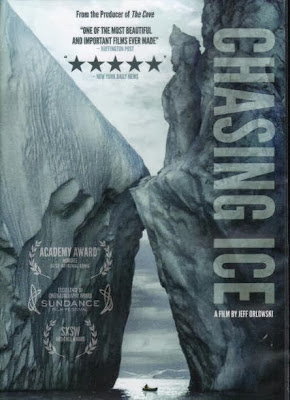 In the spring of 2005, acclaimed environmental photographer James Balog headed to the Arctic on a tricky assignment for National Geographic:  to capture images to help tell the story of the Earth’s changing climate.

Chasing Ice is the story of one man’s mission to change the tide of history by gathering undeniable evidence of our changing planet.  Within months of that first trip to Iceland, the photographer conceived the boldest expedition of his life:  The Extreme Ice Survey.  With a band of young adventurers in tow, Balog began deploying revolutionary time-lapse cameras across the brutal Arctic to capture a multi-year record of the world’s changing glaciers.

As the debate polarizes America and the intensity of natural disasters ramps up globally, Balog finds himself at the end of his tether,  Battling untested technology in subzero conditions, he comes face to face with his own mortality.  His hauntingly beautiful videos compress years into seconds and capture ancient mountains of ice in motion as they disappear at a breathtaking rate.  Chasing Ice depicts a photographer trying to deliver evidence and hope to our carbon-powered planet.

On Tuesday, September 3, Waco Friends of Peace protested Rep. Bill Flores' position on the Keystone XL pipeline and his denial of climate science in general.  We were stationed at the intersection of North 19th and Tartan Drive, where we were visible to many people arriving at Rep Flores' town hall meeting at MCC. 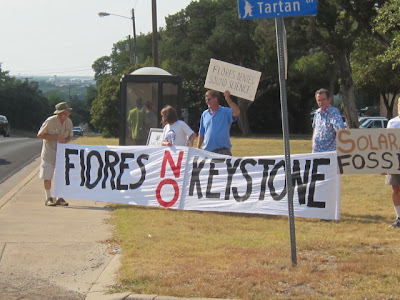 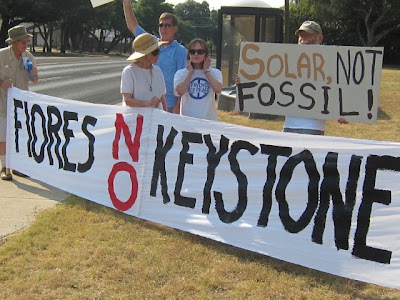 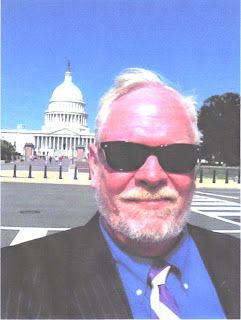 Bob Kincaid, of West Virginia, is a co-founder of the Appalachian Community Health Emergency (ACHE) campaign. His radio network has devoted more time than any other broadcast medium in educating people about the urgency of ending mountaintop removal coal mining. He has traveled world wide to build awareness of the devastating health effects on Appalachian people of coal mining pollution. Please come experience Bob’s powerful blend of progressive politics, knowledge of history, biting wit, and dedication to helping the suffering people of Appalachia.

The topic of Bob Kincaid's lecture will be “Who Needs Cruise Missiles?
An Introduction to Appalachia’s Agony.”