FUEL is a comprehensive and entertaining look at energy in America: a history of where we have been, our present predicament, and a solution to our dependence on foreign oil. It examines wide-ranging energy solutions other than oil, the faltering US auto and petroleum industries, and the latest stirrings of the American mindset toward alternative energy.

Josh Tickell’s stirring documentary, eleven years in the making, is a powerful portrait of America’s overwhelming addiction to and reliance on oil. The film offers a virtual tour guide through the drama of fuel -- the history, the politics, the mess that the world is in and the fascinating alternatives for a way out.

Tickell interviews politicians, historians, professors and a sprinkling of activist celebrities, all of whom have their own take on one of the most important and pressing concerns of the modern era. Interviews with a wide range of environmentalists, policy makers and educators, along with such “green” celebrities as Woody Harrelson, Sheryl Crow and Larry Hagman offer serious fuel for thought.

FUEL encourages the discussion about the consequences of abusing our oil resources. It exposes the shocking connections between the auto industry, the oil industry and government, while exploring alternative energies such as solar, wind, electricity, and non-food based biofuels.

FUEL challenges the audience to make a change and seek accountability, reinforcing the idea that the power of every individual can and will make a difference. 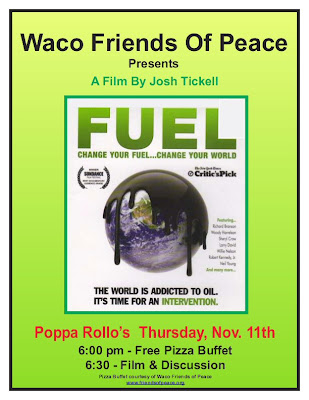 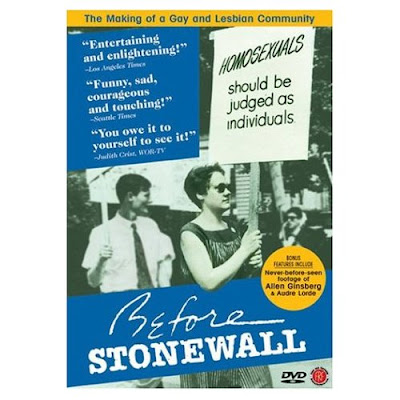 TITLE: Before Stonewall: The Making of a Gay and Lesbian Community.

RATING: Unrated, acceptable for all
audiences.

Before Stonewall relates the history
of the gay rights movement in America before the Stonewall riots of 1969. The film presents the
dramatic story of the sometimes horrifying public and private existences experienced by gay and
lesbian Americans since the 1920s. It provides a decade by decade history of homosexuality through amazing historical footage and interviews. I found the film extremely informative and
certainly timely with the current struggle over don't ask don't tell, and gay marriage. This excellent
piece was the winner of 2 Emmy Awards. You will not want to miss this one.
The following is the agenda for the business meeting:
1) Update on the One Nation Working Together regional meeting in Dallas Oct 2, 2010.
2) Billboard status.
3) T-shirt committee formation.
4) New Years Eve candlelight vigil.
5) Legislative action: Phone speed dial for President Obama.
6) Open forum. (after film).
7) Afghanistan poem.

as the nation seemingly plunges further into darkness, please help keep a light shining from the
peace movement. see you there.