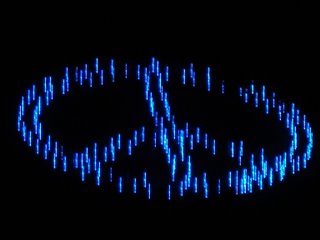 A peace sign foliage wreath received international attention recently when a Colorado couple was chastised for their holiday decoration. The small town neighborhood association threatened to fine the couple $1000 for their display-described as "divisive" and "Satanic."

A Friends of Peace member in Waco thus placed a peace symbol light display (6 feet tall) on their roof in solidarity with the couple in Colorado. The image is seen here.

Actually, what symbol in this world could be more universal and inclusive. The hope for PEACE reaches the hearts of all peoples, and does not require adherence to any particular religious sect. For the "Holidays" are about the joy of life, and without peace, without survival, there can be no celebration.
1 comment: 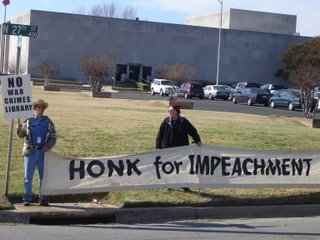 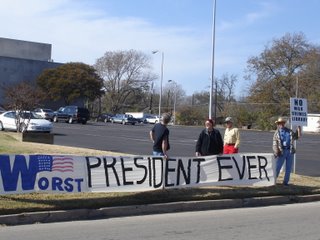 Waco Friends of Peace sponsored a protest of a meeting that promoted the goal of locating the G.W. Bush library at Baylor University in Waco. Baylor University, the Waco Tribune-Herald and local businesspeople have been actively pursuing the library in hopes of building tourism and prestige for the city. And yes, some economic benefit might derive to Waco from having the Bush library here, including to some members of FOP. But we feel there is a higher good than money, and that opposing the library is a matter of conscience. We reject a monument that would glorify the Bush legacy. A legacy of the illegal invasion and occupation of Iraq (a war crime by international standards), lies and deception that placed us in that quagmire, the resultant deaths of almost 3000 Americans and 650,000 Iraqi civilians, the estimated ultimate cost of 1 trillion $$, torture, illegal surveillance, abuse of the US Constitution, environmental damage, and opposition to equal protection for all citizens (gays and lesbians).

The lecture was given at the Lee Lockwood Library on Waco Drive at 11:45a.m. About 10 of our members and other peace activists were there at the entrance as attendees arrived. An alternative viewpoint was clearly presented to those supporting the Bush library project. The "HONKS" from passing cars (see photo above) were nearly a constant symphony.

One courageous activist found his way inside the lecture carrying a sign that read "No War Crimes Library." He stayed throughout the lecture, his peaceful and polite demeanor adding to his stunning visual statement. Thanks to Carl for his efforts and for all the other activists who took their time to speak truth to power.

At one point we were threatened with sprinklers in an attempt to silence our voices but we persisted to ask the question: Does Waco really want another black eye--the presidential library of the worst president in US history, one likely to be impeached and removed from office?
1 comment: