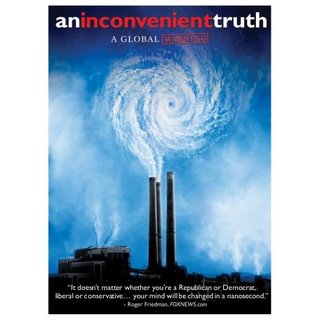 This superb documentary was not shown at the major theaters in Waco, and has had only limited screenings here. Former Vice President Al Gore presents an eye opening and compelling view of the future of our planet-and our civilization-in the MUST SEE documentary of the year. This is a wake-up call that cuts through myths and misconceptions to deliver the message that global warming is a real and present danger. "An Inconvenient Truth" brings home Gore's persuasive argument that we must act now to save the earth. Each and every one of us can make changes in the way we live our lives and BECOME PART OF THE SOLUTION.

"In 39 years, I have never written these words in a movie review, but here they are. You owe it to yourself to see this film." -Roger Ebert, Chicago Sun-Times.

"One of the most important films of our time." -Jeffrey Lyons, NBC's Reel Talk.

"It doesn't matter whether you're a Republican or Democrat, liberal or conservative...your mind will be changed in a nanosecond."-Roger Friedman, FoxNews.com

Although Secretary of Defense Rumsfeld's resignation may have inspired some to begin dancing in the streets, Dan Genz's glowing report, (Waco-Trib, Nov. 9) on his replacement, by Robert Gates, seems, just a mite too unwilling to examine all the facets of the man's previous experience.

In addition, the articles' focus on 'winning the war' in Iraq is ignoring the fact of an overwhelming message from American voters regarding the war. The Trib also seems unwilling to entertain the idea that this war was based on lies, and as such, it is unconscionable to continue to inflict such horror on a population that does not deserve it. Seventy percent of the Iraqi people want us to leave. Do they not get a voice in their future? So much for democracy. The 'war on terror' is not only a ghastly joke on the American people, but also an unholy perpetration of a 'war of terror' on men, women and children, who had nothing to do with 9/11. Who were not threats to the United States. Who just happen to be in the way of a cabal of oil pirate’s intent on looting a resource because of greed and a falsely perceived superior might makes right mentality.

Please don't be so ready to sacrifice the greater good of the United States, and the world, for a little local capital. Your readers deserve to hear a broader perspective on the replacement to Rumsfelds post.

In TomPaine.com Ray McGovern offers valuable insight into Robert Gates previous performance with the CIA and his relationship with those now pulling strings within this administration.

McGovern's background of 27 years as a CIA analyst gives considerable credibility to his analysis of Gates' CIA career that points to a 'more of the same' type of sycophant who was willing to 'fix the intelligence' in the Iran Contra affair of the 1980s. One who would not welcome the truth, at the expense of 'Cheney's energy plan', but would instead expect the same hard line loyalty from underlings that resulted in sound bites of 'smoking guns, mushroom clouds and wmds,' based only on the Bush administration pie-in-the-sky policy.

The American Public spoke up for truth and integrity on Nov. 7. Please honor us by presenting another view, from someone with in-depth knowledge and demonstrated integrity. America's', and indeed, the world's future depend on an informed public. Please do your job and give us information from various viewpoints, allowing us to make wiser decisions.
Sincerely,
Kay Lucas.

Kay Lucas of Moody is a loyal longtime worker and inspiration for the Waco Friends of Peace. She currently serves as a tireless director of the Crawford Peace House. Her work was vital in bringing the Iraq war debate to the national stage and ultimately in shortening this illegal occupation. The above letter is the original untouched version of her thoughts. A markedly edited version recently appeared in the Waco Tribune Herald.
No comments:

NOVEMBER FILM: THE ROAD TO GUANTANAMO 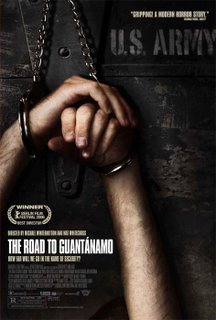 The true story of the Tipton Three, a trio of British citizens (Muslim) who were held in Guantanamo Bay for 2 year until they were released without charge. The film weaves interviews with the actual Tipton Three with dramatization of their environment, interrogation and torture. The torture which the US has committed has been well documented. But this film now brings to life the human reality.

The film is even more timely now that Bush succeeded in ramming through Congress his Military Commissions Act, in an attempt to legalize his illegal actions, and protect himself and others from prosecution. With the new Democrat controlled Congress, will there be an attempt to turn back this law and/or close Guantanamo? Come see the film and join the discussion.

The UN Commission on Human Rights, in a report of Feb. 2006, stated that "the legal regime applied to these detainees seriously undermines the rule of law and a number of fundamental universally recognized human rights, which are the essence of democratic societies," and concludes that "The US Government should close the Guantanamo Bay detention facilities without further delay."
1 comment: 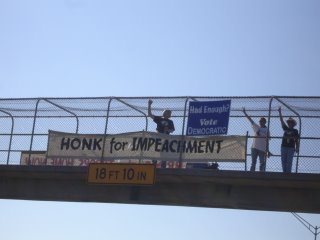 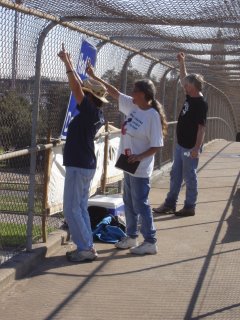 The Waco freeway blog on election day was the biggest and most successful to date. About 6 activists blogged for over 5 hours over the very busy I35. We reached directly over 78,000 adults, with an unknown number of secondary contacts. Our messages included: Honk for impeachment, Bring the troops home now, and Had enough--vote democrat. The motorist reception was overwhelmingly positive, with a tremendous number of honks. No doubt the peace movement has played an important role in the public opinion shift against this immoral occupation.
Thanks to Dave, Melissa, Sammie, Carol, and Robert for their energy and endurance.
No comments: 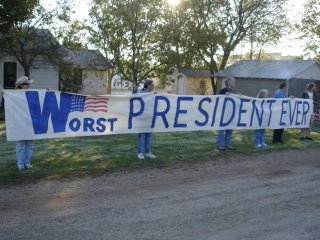 Bush snuck in to the polling station in Crawford shortly after 7a.m., carefully concealed by layers of secret service agents, large white buses, roadblocks, and lies. About 5-6 activists were there shortly after, including Friends of Peace members, led by Crawford Peace House founder Johnnie Wolf. A large banner was displayed, stating "Worst President Ever." Surprisingly, local voter response was about 50% positive. More evidence that the tide has turned against this administration, and that we are no longer in the minority.
No comments: 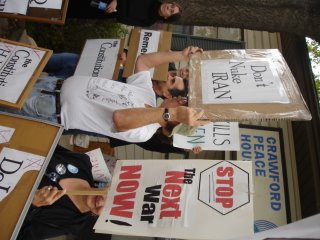 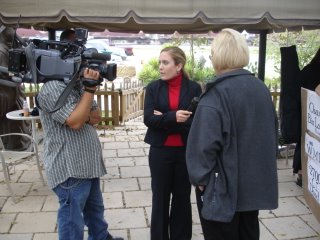 Crawford Peace House supporters, Waco Friends of Peace members, and other activists met at the Peace House on Sunday, November 5th to speak against a US attack on Iran. The group of about 15 was led by former US ambassador Ann Wright who was interviewed by local TV media. The group then proceeded to the Bush Ranch checkpoint to make our presence known to those who would bring us Armageddon. The power of our signs was enhanced by the voices of great peace musicians.
No comments: